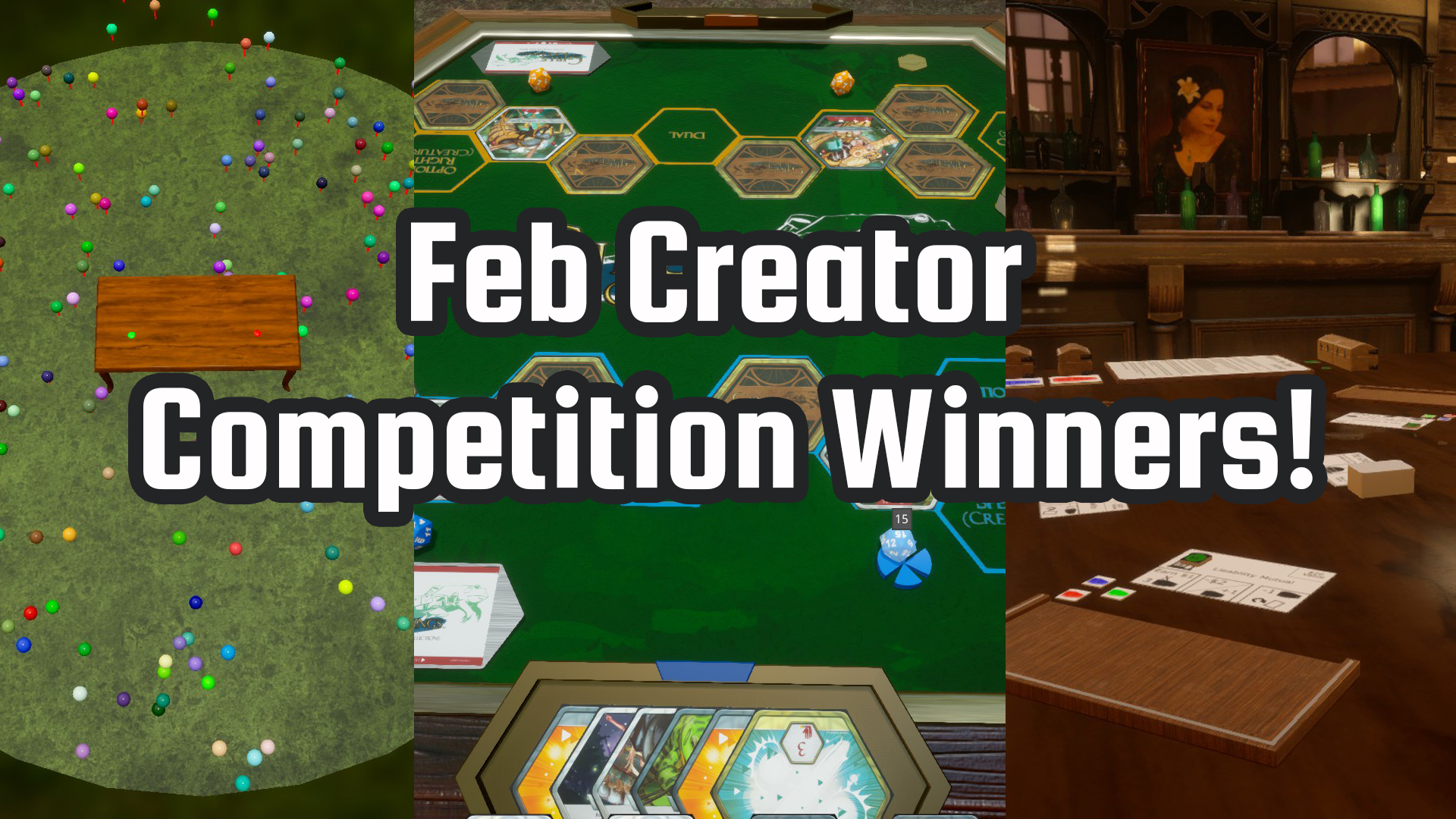 In the build up to the release of Tabletop Playground (in Q2 2020) we started the closed beta Creator’s Program late last year, inviting modders, board game creators and passionate fans to test out the latest builds of the game and to start creating games and tools before release.

We’ve been ecstatic at the number of games we’ve seen created and uploaded to mod.io (the solution we’re using for cross platform mod support) already and decided to start running monthly competitions to reward talented and hard working members of our growing community. Check out the winners for February below and a recap of our winners from January too!

We saw a diverse range of games and tools created throughout February and wanted to therefore highlight 3 different creators, who each brought something unique and brilliant to the table.

DashZero's gorgeous 'Girls With Icky Things' in action, on top of the magnificent game table they made to go with it.

Firstly DashXero, for their gorgeous original tactical fighting card game ‘Girls with Icky Things‘. Although it’s only in pre-alpha at this stage and requires further testing, it’s already showing plenty of potential and showcases TP’s visual potential. They even built a full custom table for the game to be played on too!

The second highlights Duranu, one of the most active and productive members of our community who posted several great packages for a couple of games throughout February. Their work demonstrates the ease and tremendous speed at which games can be developed and implemented into Tabletop Playground.

Finally, the third prize goes to Salami, another highly active member of our growing community for their work on the tool ‘Simple Buttons for TP‘. JavaScript scripting is a huge feature for Tabletop Playground, which will allow creators to build games with complex rules and systems, to ensure games are all the more streamlined and fun. Salami’s work is a great example of the potential of scripting and is one of the most complex scripting tools we’ve seen so far.

Join the Creator's Program now and you can start testing out tools such as Salami's 'Simple Buttons' for Tabletop Playground.

Each winner will receive a code for the final release of Tabletop Playground, so they can continue to create incredible games and tools following the game’s release. Speaking of which, if you’re interested in signing up for the closed beta to start creating games for Tabletop Playground before its release and go in the running for the next set of prizes, join our Discord community now to enter!

We wanted to quickly mention the winners for January and our first monthly creator’s competition too. Firstly to CrazyVulcan, who uploaded the first full original game to mod.io as part of the Creator’s Program with ‘Here’s The Deal‘. While we gave out a second prize to Morty, for their incredible efforts at uploading an impressive amount of packages for several different games in one month. Including the first package to make use of the scripting functionality!

'Here's The Deal' being played in the western saloon, one of several 3D environments available to hose your games in Tabletop Playground.

Congrats to all our winners from February and January! We’re excited to see what our community creates in March, how you continue to push our in-game tools to new levels and to see who will be our next set of winners 🏅

As always, to be the first to know exactly when Tabletop Playground will be releasing in Q2 this year, be sure to follow us on Facebook, Twitter, IndieDB, Steam, Itch.io, join our Discord and sign up to our newsletter. Until next time Meeples, we hope all your games are good ones!